Every time I launch back into on line dating, I’m always stunned by the sameness of online dating profiles, and just how lazy a lot of men seem to be when it comes to creating a profile. Actually, a lot of men use one picture and write nothing on their profile…as if they are so amazing and dazzling that their one lone picture will elevate them to the top of a sea of other profiles!

Seriously, guys, you might be doing yourself out of some dates here!

Yes, I’d love to find the man of my dreams organically in a coffee shop, or at a gig…let’s face it, it’s not happening. Online dating is as mainstream now as iPhone selfies. Now, I don’t claim to have a full proof or top class profile myself but I think it’s important to at least write something that sums you up even just a little bit. For example, I state that I’m left wing politically, that I write and that I have eclectic tastes in music. I add what I like to do in my spare time – live music gigs, exhibitions, etc. It’s a small snapshot of who you are after all. Are you a wiz in the kitchen? Do you love the ballet or are you a trivia aficionado? Do you jog, cycle or run an animal shelter?

If someone has one photo and no written profile on Tinder, for example, I’m going to swipe left (meaning no for the uninitiated), regardless of your pearly whites. I mean, fellas, if you can’t even take two minutes out of your busy day to sell yourself, I’m guessing you’re a lazy dater in the real world. When I first entered the online dating arena years ago, I would have thought that was the norm. I now realise one’s effort on their profile is generally an indication of how much effort they are prepared to offer on the romance front.

I am on two different dating sites right now, also common these days. Some stick with one and others are on multiple sites of course. Whatever works for each person may be different. There are no hard and fast rules for such things. I’ve found though that while I’m an incredible multi-tasker in my day job, and in my busy life, I’m really not that great at juggling multiple conversations with many men. It just feels very weird and keeping track of who is who can be tricky and time consuming. I have likened it to job hunting…it takes a lot of patience and a dash of courage to put yourself forward. Some people are amazing at this and I take my hat off to them!

What most struck me most about dating profiles this time around was how many men use similar pictures to promote themselves (and let’s face it, we are all promoting ourselves on line hoping to catch the eye of someone awesome).

What is with every third man putting a picture of themselves draped over a sedated tiger?! I can only assume these pictures are taken where such things are legally permitted – Asian holiday destinations? Many, many years ago, I held a baby tiger in Thailand. I have always felt guilty that I have helped in that way to keep animal captivity for tourist trade going…but there are so many men in the here and now posing with live big cats, mostly tigers, sedated for this very purpose. How many tourists must these poor creatures have to pose with on a daily basis?! If the dating site I’m on is anything to go by, a considerable number of Aussie males, apparently.

Is this common place profile picture meant to portray the “hunter” in men and perhaps play to the “gatherer” instincts of women?

Yeah, it’s not working guys. Draping yourself over an animal in captivity does not make you seem more strong and sexually appealing. It makes me sad for the large cats and you less appealing.

Some savvy men get this concept already. I have seen some very clever profiles where guys have written “Ladies, I have no pictures with tigers…”  Well played, sir. My profile actually states “must be wearing clothes and not be draped over a sedated tiger…” which goes some way in explaining how many tiger pics I’ve seen. I have to be honest. I wouldn’t date a smoker, nor a guy with a tiger pic. 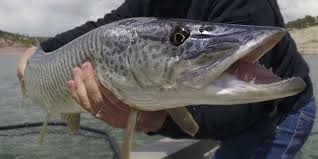 Now, if I thought there were a lot of tiger pics, they have nothing on what I refer to as the ‘Fish Pic’. Before you think that was a typo, I’m referring to how many photos there of men holding actual fish!  Fish of all sizes, shapes and sizes… Look at me, great provider…check out the size of my very ample fish…

Are the fish indeed metaphors for their phallic extremities? Is the size of the fish they hold indicative of the size of their penis? I love seafood as much as the next person, and I’m sure to catch a fish takes great skill, but I had no idea so many middle aged men considered themselves to be fishermen. I mean really? So many fish, so little time.

I started taking screen shots of men-with-fish and sending them to a girl friend who finds them incredibly amusing at how many there were. On the rare occasion, one will be slightly different.

Or man-holding-lobster….Is that a lobster in your pocket, or are you just happy to see me?

In fairness, I have male friends who are online dating who make the same comment about women holding cats. Apparently there are many women holding felines…I guess the same argument could be used then for a lack of creativity in female profiles. At the very least, if you must include the fish pic, don’t make it the first picture we see!

Something else that really struck me too was how many men have photos with their children on their profiles. My best male friend assures me women do this often too, and that he finds it particularly creepy.

As a parent myself, I find it a little bit strange that anyone would want to put photos up of their children on a dating site…on the internet…the world wide web, people! The internet is a strange place, and the online dating world is fraught with uncertainty…and hello, strangers!  I understand that perhaps people are trying to say “look, this is my family and I’m family orientated”, but  you can write that in your profile and not have your kids exposed to complete strangers you’ve never met.

My advice would be don’t put your kids on an online site where countless strangers can and will view them on a daily basis.

Which leads me to the last one…

This is a common one among men. I get that if you are including these pics on your profile, you’re generally happy to show off your wares and all the power to you.  I’ve seen men of all sizes and shapes using this half naked pose.

When I asked around before writing this post, a lot of women I spoke to said they find it off putting. Rightly or wrongly it’s viewed as an advertisement that guys are just seeking casual sex, or they are seen to be narcissistic or arrogant. At the very least women think you’re the type of guy who will send unsolicited dick pics if they initiate contact…and I don’t mean memes of Donald Trump.

If this is the case, go forth all ye bold men. If you’re only wanting casual encounters, it’s okay to state you don’t want anything serious and you don’t want to settle down!  There are women out there seeking the same, and I respect people for being honest about it. It saves time and energy.  There are also many less mainstream sites that cater for casual hook ups…

But if a man is actually seeking a deeper and more meaningful encounter then the shirtless selfie might have women dismissing you as less than a serious contender. One male friend of mine who is super fit and a body builder shared his profile pic of me, which was him showing off his naked guns and six pack. He conceded that he eventually changed the picture to a smiling selfie with his shirt on when he was being propositioned for sex all the time when he wanted a relationship. Another male friend said if someone wants a half naked pic, they’ll ask you for one. Good call!

My Good Girl tips for a great profile?

In the big scheme to things, be yourself, share something real about you.  Keep your shirt on unless otherwise asked,  put up more than one photo (and no group pics where people have to guess who the hell you are!), save the fish for the BBQ and the tigers for the jungle…women will thank you for it!